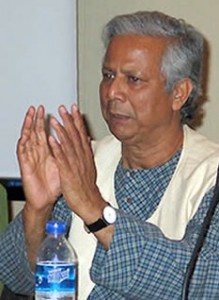 Micro-giving is most often thought of as the charitable donation of small increments of money from individual donors to a specific recipient. As it has developed in the past decade, it can be seen as a marketplace where philanthropic needs are offered to a “customer base” in search of opportunities to support, or invest, in causes, societies, and endeavors in which they believe. Micro-giving can be seen as having grown out of Nobel-Peace-Prize-winner Muhammad Yunnus’s Grameen Bank initiative begun 30 years ago to provide micro credit to individuals in Bangladesh. In its short history, micro giving has been largely the province of aggregating philanthropic websites offering a wide variety of giving opportunities. However, micro-giving can be an important fundraising tool for individual nonprofits in search of additional support for specific programs and institutional needs. Overall it should be thought of as part of a small-gifts program that reaches out to donors willing to make smaller donations. Traditionally, most nonprofit organizations have been inclined to concentrate fundraising efforts and resources primarily on seeking large donations and cultivating major donors—both individuals and foundations. Historically about the only ongoing effort to obtain smaller donations has been as part of annual fundraising campaigns to meet operational deficits. Micro-giving is a newer way to seek smaller gifts, but it should not be thought of as an alternative to a traditional annual fund appeal. The annual campaign is the tool for offsetting operational deficits. Micro-giving campaigns are best used for soliciting small gifts for specific purposes. They are a form of designated giving. Small gifts have been known to provide the major funding for organizations. Notably, Heifer International (a former employer of mine) has relied on small gifts for more than 80% of its contributed income. More recently true micro-giving programs have played major roles in disaster-relief fundraising—the 2005 tsunami, Hurricane Katrina, and the 2010 Haiti earthquake.

In the case of Heifer International, small gifts were a successful strategy because Heifer developed what we have come to call alternative giving in the form of the Heifer gift catalog. This effort predates online fundraising, but was given a substantial boost by the advent of website giving and email solicitation. The micro-giving efforts that have supported relief from disasters owe their success almost wholly to creating the opportunity for donors to instantly make gifts online or use a phone as a simultaneous pledge and collection tool in response to their impulse to help.

Impulse giving goes hand-in-hand with micro giving. The Internet has made it possible for individuals to give to nonprofit organizations at a moment’s notice. The Web brought a philanthropic mall to every computer. Then it created an entrance to that mall on the screen of every cell phone and the burgeoning collection of Web-connected handheld device such as the iPad and other e-tablets. Just as people can shop and make purchases of goods impulsively as a result of seeing merchandise displayed at the physical mall, they can give impulsively as a result of having been exposed to need by an organization or cause that calls to them. The smaller the size of the asked-for gift, the easier it is for someone to respond impulsively and make a charitable donation. That’s why impulse giving and micro-giving are so linked. If an organization sequentially makes legitimate cases for gifts in support of multiple philanthropic opportunities, people have shown that they will make repeat gifts. Ask for support for initiative A, then ask for B, and then for C, and a donor is more likely to give two or more times than if she is asked for three separate gifts solely to one of the initiatives. Each new case for support engages the donor in a fresh way. Each separate reason for giving provides the opportunity for a new impulse response. This is particularly true for individuals more invested in the work or content of an organization than in the organization itself—donors for whom mission matters more than the organization fullfilling that mission. Micro-giving and the Internet have lessened the threshold over which a donor must carry his gift. Making a charitable donation makes a person feel good. The endorphins flow when we make a philanthropic gift. Our finger wants to push the button that sends the gift. But every additional step that has to be taken to complete our gift-giving impulse is a hurdle over which we must leap. The goal for organizations wanting to facilitate impulse giving should be to remove as many of those hurdles as possible. The first three hurdles are the questions: The case for support and call to action answer the first question. The credibility, reputation, and depth of relationship the organizaton has with the potential donor take care of the second. Size of gift is the answer to the third. Almost everyone can make a micro gift without financial impact. Every hurdle that can get in the way after these first three is one of process. Make the process easy and fast, if you want more gifts.

When we take into account what we know about the attractiveness of micro-giving to today’s donors and in particular to younger donors and what we know about impulse giving, it’s easy to see why organizations should consider developing an initiative for seeking micro gifts. A successful, ongoing micro-giving program relies on: So, what size gift is a micro gift, and what is the dollar amount that makes a gift more than micro? There are no set numbers. One size does not fit all. A micro gift is the amount of money that a person would not think twice about spending. For some that may be a dollar. For others $5. Still others $10 or $20. Maybe even $100 or more. It’s relative. When seeking micro gifts, it’s a good idea to rate the ability of potential donors to give. If you are making requests via email to your existing donor base, you can do this by looking at past performance. The person who gives the organization $1,000 every year probably has a higher micro-gift threshold than someone who gives $100 each year. There is nothing wrong in segmenting your list and asking for different size micro gifts. Just remember to create the supporting web pages for each segmentation. A micro-gift request needs to be tied to a specific need with a specific defined outcome resulting from the gift. If the organization needs money to: then a micro-giving campaign might be the answer. However, any micro-giving campaign is best served if the case for support is likely to engender empathy and an emotive response. Raise the emotional level, and the impulse to give kicks in. And micro-giving campaigns are most successful when the impulse to give is at its in-the-moment highest.

As part of a campaign to match a $50,000 grant, MyJewishLearning.com in 2009  decided to go to its email newsletter subscribers for $10,000 in the form of micro gifts. In appeals sent to those 50,000 subscribers it asked for individual gifts of $2. The appeal form included check-offs for gifts of $2, $5, $18, and $36. More than $11,000 was raised from 850 donors. Small Can Be Big is an organization in Waltham, Massachusetts that specializes in helping local families who are either homeless or on the brink of becoming homeless by harnessing the power of small donors, many of whom are young adults. Twitter and Facebook are key components in a strategy that yields a median donation of $15 for the organiazation. One case from late 2009 centered on a child in a homeless shelter who had cancer. In less than an hour Kelsey Warner, an intern at Small Can Be Big, put together a 400-word profile and case for support asking for $1,500 to get the child and his mother into an apartment. The case was posted on SmallCanBeBig.org on December 1, and 16 days later the goal had been reached. Eighteen people in ten states made gifts averaging $85 each.

Any fundraising effort needs a platform from which to operate if it is to be successful. Such a platform usually consists of tools for creating and delivering the request for a donation and then a way to respond to the donor with appreciation for the gift and with information about the impact of the gift. For micro-giving programs that platform should consist of:

This site uses Akismet to reduce spam. Learn how your comment data is processed.